If we trace back our family trees, our ancestors all came from somewhere else. In my case, I have ancestors on my mom’s side that were some of the earliest immigrants in the American colonies. My 9th great grandmother, Sarah Rapalje, is supposed to have been the first white European Christian female born in New Netherland in 1625. Other ancestors were early settlers in Jamestown, Virginia (also in the 1600’s.) All of my dad’s grandparents were more recent immigrants. They came from Europe in the 1860’s & 1880’s.

Interestingly, many people have family stories that claim Native American ancestry. My husband was supposed to have some Iroquois. My sister-in-law, was supposed to have some Cherokee on her mother’s side and Lumbee on her father’s side. A nephew’s wife was supposed to have Native American, too.  Lumbee ancestry in my sister-in-law is the only one that appears most likely to be true. (Some African Americans were slaves of the Cherokees and may have been later adopted into the tribe even though they have no biological connection.) The Lumbee, or Croatan Indians, have a long history of intermarrying with African Americans and European Americans that may go back to the lost European Colony of Roanoke.  My nephew had a DNA test that reported 0.3% East Asian & Native American (The distinction between East Asian and Native American ethnicities in DNA are at this point often unclear, His estimate includes 0.1% Indonesian, Thai, Khmer & Myanma, but I doubt that is correct.)  0.3% would be consistent with having one Native American 6th great grandparent.  But, it is also likely he may have had several more distant Native American ancestors. …Either way, Native Americans also immigrated to America, maybe 13,000 years ago, just as all our ancestors migrated out of Africa and spread to all the corners of the earth!

Excerpt from “The New Colossus” on the Statue of Liberty

With silent lips. “Give me your tired, your poor,

The wretched refuse of your teeming shore.

Send these, the homeless, tempest-tost to me,

I lift my lamp beside the golden door!”

None of my ancestors were greeted by the Statue of Liberty  –which was dedicated in 1886.  They all immigrated before it was erected, The Ellis Island Immigration station also came later in 1892.

Most immigrants came for economic, political, or religious reasons. Some men immigrated to avoid military service; some may have come as a part of their job as soldiers, missionaries, sailors, government officials, or other contracted tradesmen and decided to stay. Some may just have been adventure-seekers, just wanting to explore and see the world.

Some came as indentured servants, having to pay off a debt with years of servitude. Others may have come unwillingly having been captured and sold into slavery.

Just as for refugees in today’s world, many may have been fleeing war, poverty and/or ethnic or religious persecution. They hoped to find jobs, acquire land and perhaps make their fortune.

Some reasons for coming may have varied by ethnicity.

I have often been interested in figuring out why my ancestors decided to leave their homes to travel to an uncertain future in the New World. Following are some speculations about of my ancestors who made the journey…

All of my dad’s grandparents came from Europe.

They both came from Schleswig-Holstein in Germany. It is unknown whether they knew each other before coming here, but it seems likely. They were married less than 4 months after Marie arrived. They were both children in 1867 when the Danish province of Schleswig & the German province of Holstein were integrated into the Kingdom of Prussia. It could be that the new taxes, bureaucracies, and social changes may have influenced their decision to leave and come to America.

They settled first in Manning, Iowa where Claus worked as a Miller in the employ of Mr. V. Roush. They later moved to Holstein, Iowa; also to work in a mill. Later, they owned a farm, a bar, a lunch counter and a lodging house in the small town of Holstein. 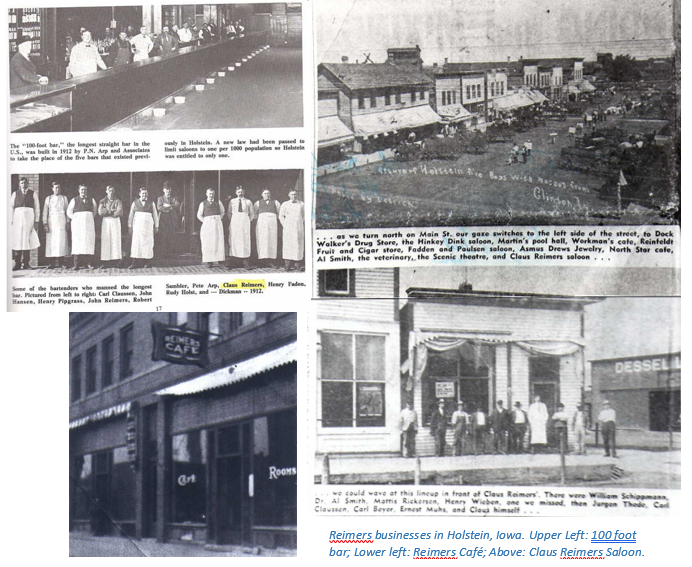 Eilert had been a sailor, like many men from that region. When they came to America, they settled in to farm, originally in Grundy County, near Ackley, Iowa and later in Wheatland Township in Carroll County, Iowa.

The Irish problem is well known to us. The Irish suffered much under British rule. However, it appears that the family of Michael Kelly fared well enough through the Potato Famine. Having converted to the Church of Ireland, he was employed as a schoolteacher at a parish school in Beigh, Askeaton in County Limerick. He also sometimes worked as a visiting tutor.  Michael may have lost his employment prior to the eventual disestablishment of the Church in 1871. 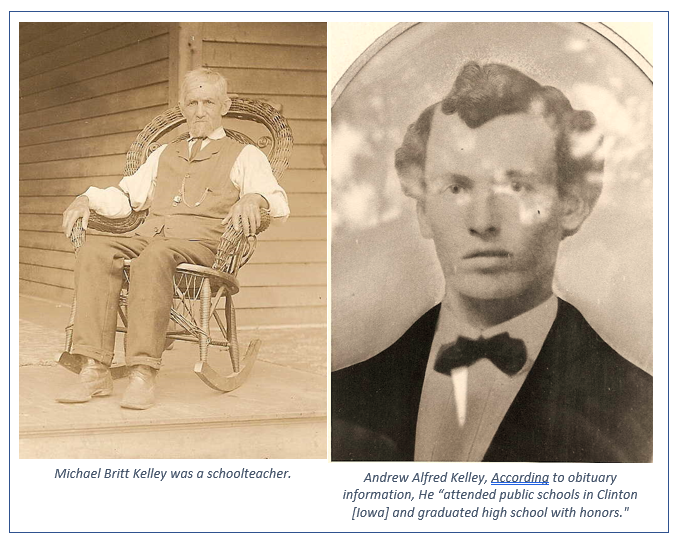 Andrew, in his poems, wrote of being “An exile driven from the land Where all my kindred dwell.” He also wrote a poem called “An Irish Maiden’s Answer to her lover” in which he wrote: “No, Gerald, tho’ you have my heart, you’ll never have my hand While yours draws sword for England against my native land.” I can only speculate that he was perhaps involved in some political intrigue even though he was only 16 years old. I also wonder why he changed the spelling of his name. Perhaps he anglicized it due to prejudice against the Irish in Iowa?

It appears that he may have acquired the land, before bringing his family over. His father, also James Lawson, immigrated as well…which make things confusing as to which James is which in records.

One source says “James Barbour Lawson, came to America about 1775 from County Donegal, Ireland. The family name apparently was originally McLaren, but family tradition has always said the Lawsons were not originally from Ireland or Scotland, but from the Isle of Man.”

The earliest of our Cliffords in America were James (1701-1782) & George Clifford (1712-1757). We are unsure whether they were son & father, or brothers as is presented by Hugh Clifford in “Cliffords, New Jersey to Pennsylvania and Beyond.” George mentions both a son, James, and a brother, James, in his will. They appear to have been from Yorkshire, if all that Hugh hypothesized is correct.

They appear to have been in New Jersey prior to 1730. (James’ son Charles, my 4th great grandfather, was supposed to have been born in Hunterdon County in 1730.) “One of the earliest records of George Clifford was in 1738 when he was in Hopewell.” Hugh states: “I can find no records of James Clifford in New Jersey prior to 1755, when he and apparently his sons George, Charles, James, and Edward were on the Subscribers list.”

George Clifford was a “Cordwainer,” (a shoemaker) and had taken on apprentices in his trade. [Interestingly, another ancestor, Robert Irwin (1782-1853), was also a shoemaker. He was from Scots-Irish, Welsh and English ancestry. His daughter, Mary Ann, married William Clifford, a grandson of Charles Clifford.]

I find it interesting what was considered of value and what was necessary for life in early America. At the time of his death George Clifford still owned the time of 2 apprentices, or bondsmen.

We know little about James Clifford other than what is listed in his will. We do not even know the name of his wife.

It is clear by this will that James had some negro slaves listed amongst other livestock. (A wether or weather is a castrated ram.)

John settled first in the Philadelphia area, one source says “He so liked his life here that he joined in the fighting in the war.”  John was a corporal at Valley Forge with George Washington and was listed twice as having “insufficient clothing.

His family later settled in Somerset Co. PA where John was granted 336 acres of ”bounty land” in Milford Township for his military service.

They probably left Alsace due to economic and or political reasons. Alsace was constantly being annexed back and forth between France and Germany.

J. Georg moved his family to Grayson County, Virginia sometime in the 1780’s, where his surname changed from Hechler to Hackler.

In a biography from the Baugher Website of Heritage, it is written: “America kept coming back up in his discussions with his wife. He may have thought it was a calling of God for him to go and preach the word of God to the new world. A lot of Germans were leaving and the tales told were amazing or at least promising. The reality of such a journey was an entirely different. There were so many Germans immigrating in fact there were more people speaking German in American colonies than any other language at the time. Therefore, it would not be a problem for him to communicate with people. This was discussed time and again with his wife and most likely his father who may or may not of agreed….With the Saarland (Palantine) being ravaged by the French, war constantly looming in Europe, disease running rampant, JGB was about to set out on the biggest adventure of his life. ”

They had two children when they set out on the journey. The baby fell sick and died in a seaport town prior to crossing the Atlantic.

Johannus G. Bager helped to to establish many Lutheran churches in New York, Pennsylvania and Maryland:

He changed the spelling of his name to Baugher, presumably so it would be pronounced more like the German pronunciation of the name Bager. Many of the Baughers in the United States, descend from them.