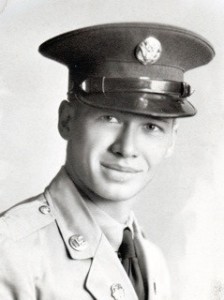 Served in the U. S. Army

Warren left high school in his sophomore year in Holstein, Ida County, Iowa, as 6 foot 2 1/2 inch, age 17 years, 17 days. He promptly added a year to his age and enlisted in the United States Army at Fort Omaha, Omaha, Nebraska, Date Enlisted: 13 October 1931. The United States was in a deep economical depression and nearly half of American’s able-bodied men were unemployed. He had enlisted because there was no work available in or around Holstein, Iowa. Description on Military papers, Height: 6 feet 1 1/2 inches in height, Blue eyes, Hair, Light Brown, Complexion: Ruddy; Comment: His eyes were Hazel in color not Blue. (Tattoo’s on Warren’s arm list places of service: San Francisco, Philippines, China, Japan, Formosa, Guam). Also printed in the Holstein Advance Newspaper October 1931, Warren William Kelley, son of William and Marie Kelley has joined the United States Army.

On Warren’s way to the Philippines, he had a stop over in San Francisco, California, were they were just starting construction on the Golden Gate bridge. While stationed in the Philippines, Warren found himself assigned to the construction battalion responsible for building the gun emplacements and labyrinth of connecting tunnels and munitions storage areas on the Island of Corregidor. Warren was the first tram operator to take a vehicle through the completed Corregidor tunnels.

It was while they stationed him at Fort Omaha, Omaha Nebraska, that on a blind date he met, courted and married Shirley Marian Shaw on 29 Sep 1936. At the time of their marriage, Warren was a private in the United States Army

From his daughter, Sharon Kelley Knoblock