We get 50% of our nuclear DNA from each of our parents. But because of how chromosomes recombine and divide during meiosis, the contribution that we get from our grandparents can vary, even though the PROBABILITY is 25%. Therefore, each generation of more distant ancestors may contribute varying amounts to our genome.

What we know about Ed’s ancestry:

Tracing back his tree, Ed Sr. is all French Canadian.  I have only found one German amongst all the French. I have not been able to verify the family lore of any Iroquois, or other Native American in either the tree or the DNA analysis.—

This is also confirmed with his, and Ed Jr’s inclusion in the French Settlers Along the St. Lawrence Genetic Community:

Overview: “Many French settlers of the St. Lawrence Valley came to present-day Québec, Canada, to work in the fur trade. They lived in a harsh climate surrounded by dangerous wilderness and hostile native tribes. Life became even more challenging after the French and Indian War when the British assumed control and classified French Canadians as second-class citizens. While some left for New England and industrialized cities like Chicago, Minneapolis, and Detroit, those who remained created a strong community centered around Catholicism and their French heritage.”

Here is the new ethnicity estimate for Ed Sr.:

It is pretty much as would be expected. It is likely that many of his ancestors were from Normandy which could account for the 10% England, Wales, Northwestern Europe.

Pam’s mother, Malvina Schumacher Scott, is mostly all ethnic German. Her ancestors settled in North & South Dakota after living a couple of generations in “Little Russia” or the Odessa region in the Ukraine. Most were originally from Alsace, some from other parts of Germany.

This is also confirmed with Pam and Ed Jr’s inclusion in the Germans from Alsace-Lorraine in North Dakota Genetic Community:

Overview: “German-speaking immigrants first came to America for familiar reasons: land, economic opportunity, and religious freedom. Ongoing revolutions in Germany prompted many more to follow. In America they were known as excellent farmers whose hard work and unique culture transformed the American Midwest, which even today has the highest proportion of German ancestry in America. However, despite their contributions, they faced prejudice and discrimination during World War I and World War II.”

The biggest puzzle has been Pam’s father’s, Oren Scott’s ancestry. Since he was adopted, It has taken a lot of research to determine his ancestry.

I have confirmed that his biological mother was Mildred Kathleen Bearns (1905-?). She was born in South Africa, the daughter of a prospector originally from St. John’s, Newfoundland. Her ancestry appears to be mostly English & Irish.

I have also determined that the man, Mildred Bearns married was not the father of her baby. (Oren was born less than 5 months after she married.) I am now pretty sure his biological father was a Canadian trucker by the name of Carlton Lundy, the only son of Alice Rand (1904-?). Pam has a lot of DNA cousin matches with the Rand family. The Rand family originated in New England, mostly Maine & Rhode Island. The Lundy family traces back through Manitoba & Ontario, back to New Jersey, Pennsylvania, New York, & Connecticut with some French & Scottish lines. Pam has some distant cousin matches related to this line—I am waiting to get some closer matches before I am absolutely certain of this relationship.

Both of these lines on her father’s side are likely where Pam gets her connection to the Settlers of Colonial New England Genetic Community:

Overview: “Long a haven for English colonists, the rocky coast of New England welcomed newcomers from the Palatinate region of Germany and Scots-Irish from northern Ireland in the 1700s. After the French and Indian War, the British increased taxes on the colonists and tensions began to rise. Boston became the center of the revolutionary spirit until the American colonies won their independence. Eventually mills and manufacturing overshadowed farming, and Boston and New York became crucial international ports and centers of American literature, culture, and the arts.” 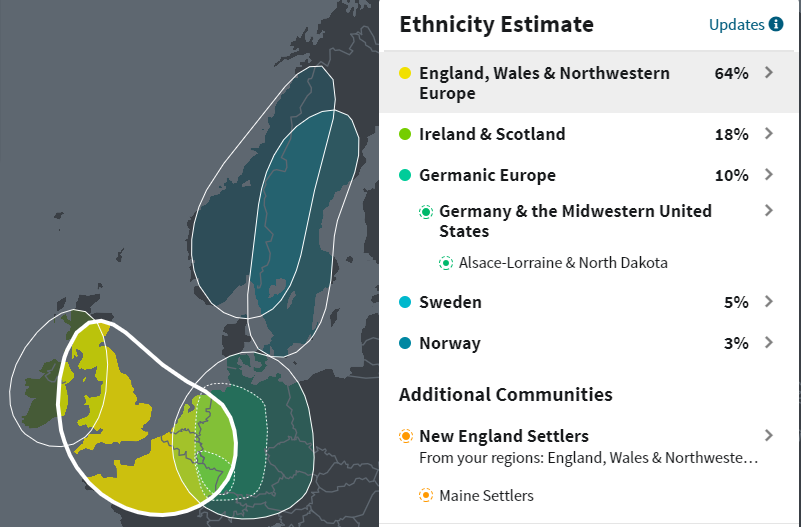 I would have expected more German than what is predicted here. It should be closer to 50%, but the Northwestern Europe category appears to include Alsace, barely, and some of Germany. It is likely that some or most of the Scandinavian is from her mother’s side, too.

I expected at least 14% Ireland & Scotland from her dad’s side, with most of the rest (~32-36%) being English. So it appears that Pam may have received 1/2 of  her England, Wales & Northwestern Europe from each of her parents. 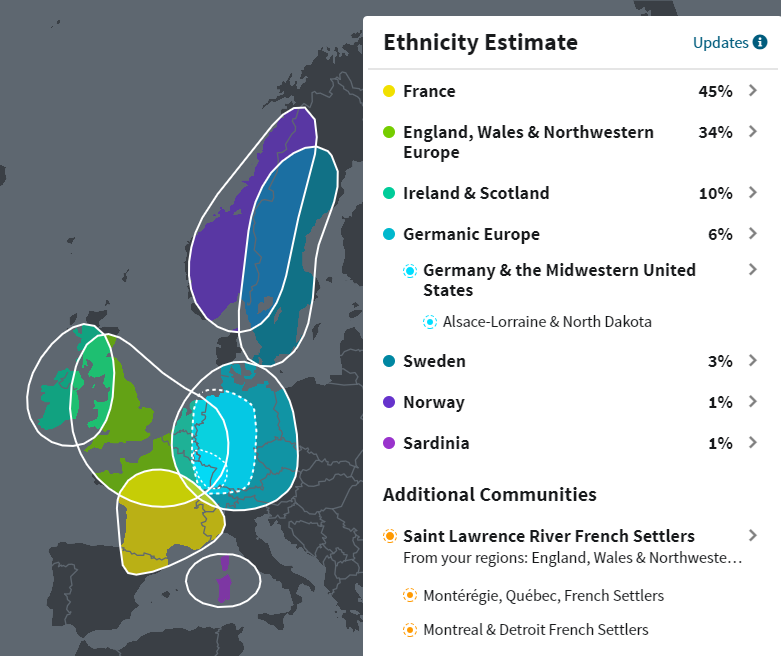 Comparing Ed Jr’s actual estimate with his (predicted) estimate using his parents’ estimates I get the following:

So it is pretty close, except from whence did the 1% Sardinia come? I would guess mostly from his dad’s side, but in order for it to show up in Ed Jr. and not in Ed Sr., he might have got some from his mom’s side, too!

Here is Edmund Jr.’s results compared with his son, Sky’s: 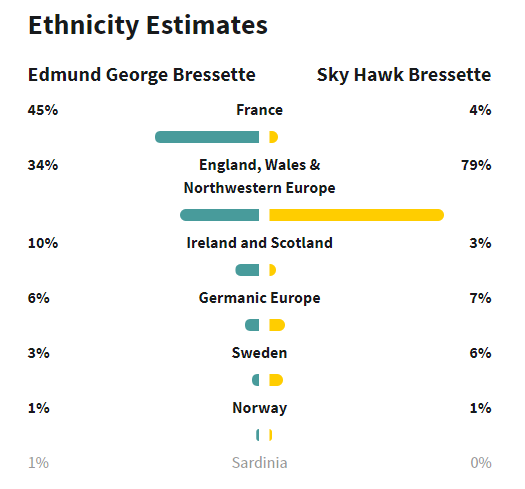 If I compare what Sky’s actual results are with what would be (expected) from averaging his dad’s and mine, I get the following:

He appears to have inherited much more of the English than any of the other ethnicities. He didn’t get much of the French, German or Irish! Looking at the following chart, it looks like he got about 7.5% more DNA from his Grandma B than his Grandpa B.

Here is a comparison of DNA shared amongst the Bressettes and the Scotts: (Percentages on the bottom left half of the matrix and the actual centimorgans shared across/# of segments on the top right.) 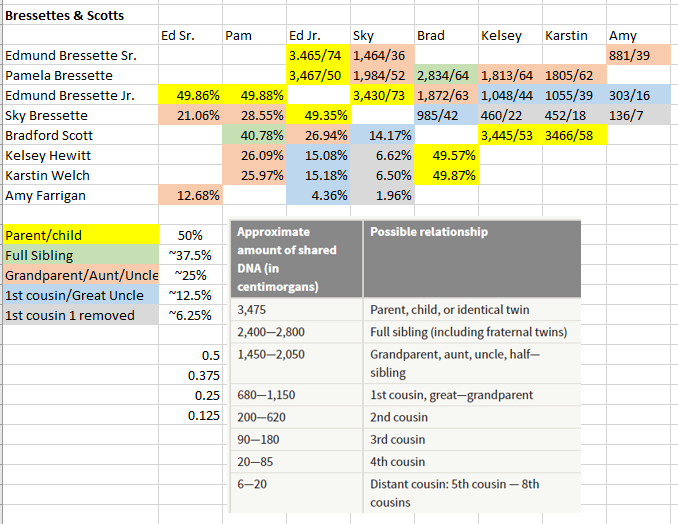 The biggest anomaly here is that Amy Farrigan, (Ed’s Sr’s niece and Ed Jr’s cousin appear to share half the DNA than would be expected. (Lisa shared Brad’s results with me, but I don’t have Karstin & Kelsey’s, so I can’t compare them to each other. It also takes a manager to update to new ethnicity estimates, Brad and his girls haven’t done so— I can’t compare apples to apples!) 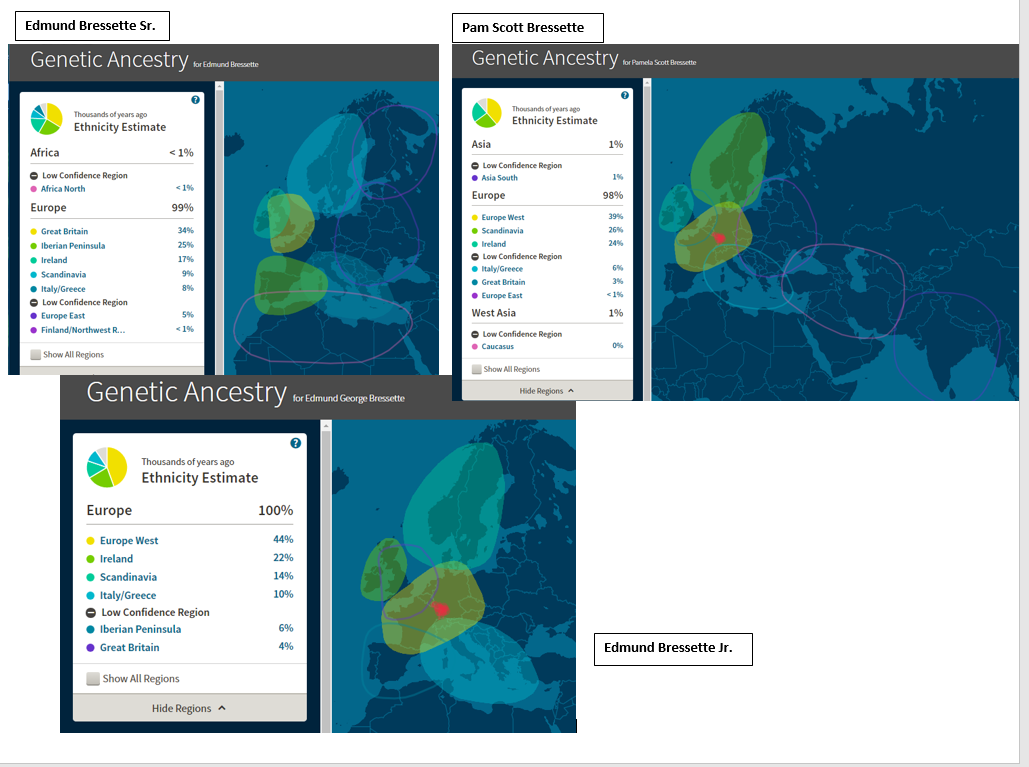 These percentages from DNA results are only estimates, median values of a range of possibilities. The width of the range depends on how heterogeneous or homogeneous that ethnic group is.

It is important to note how they come up with these estimates. They compare our DNA to a sample group of individuals from each region. It sometimes becomes difficult to distinguish distinct ethnic groups, depending on how much interbreeding occurred between groups. Those living close to trade routes or coastlines subject to invasion are likely to be genetically diverse than those who were more isolated.

Since Ed Sr. came up with a lot of Great Britain and no Europe West, it seems likely that much of his French were Norman.