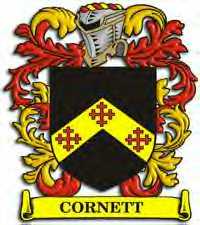 Family lore claims that our Cornetts, Cornutts, and Canutes, descend from King Cnut, a Danish Viking prince who won the throne of England in 1016.  Cnut ascended to the Danish throne in 1018 and claimed the crown of Norway and part of Sweden in 1028.  His mother was daughter of the first Polish King.  His only legitimate son was Harthacnut by Emma of Normandy; After his death, Harthacnut’s throne reverted to his half-brother, Emma’s son, Edmund the Confessor.  After the death of Cnut’s heirs and the Norman conquest of England in 1066, his achievements were largely lost to history.  The lack of known living progeny brings the claim of descent from Cnut into question.

Cornett is usually thought to be an occupational name for a hornblower or someone who works with horns, derived from the Latin, Cornu, or Middle English or old French, Corn, meaning horn (or antler).